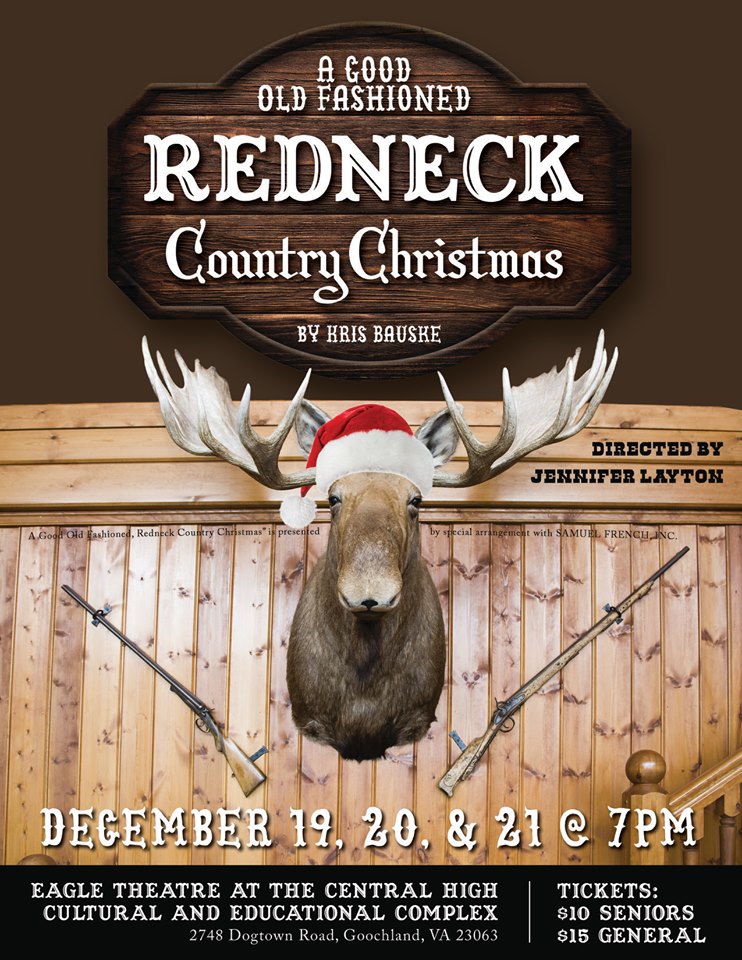 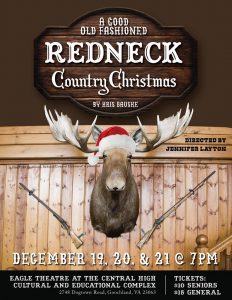 Rehearsals will be Mon-Thurs at 7pm and Saturdays from 10am-2pm. Schedule will vary based on actor availability.

BOB/NARRATOR – Bob is a semi driver whose truck just broke down on Christmas Eve. He is spending the day at Lou’s Diner, hoping his truck will be fixed before the blizzard strikes. Bob is an older gentleman, 55+, and he shares the story of what happens in Christmas. Calm and wise, we see the story unfold through Bob’s eyes.

LOU (LOUISE) WEXLER – Lou is a bubbling bundle of energy. She takes command of the stage like she takes command of her diner. 40, she is attractive, intelligent, and well-respected. Everyone values Lou’s opinions. She would never be considered thin, but she’s not fat either, and she’s proud of her curves. Her hair and makeup are flawless, and she exudes an air of absolute capability. Lou is always moving, dispensing tough, no nonsense wisdom as she bounces from one task to the next. Lou is energetic hospitality personified. She doesn’t necessarily speak with a regional dialect, because let’s face it there are rednecks in every state in the country.

BILL WEXLER – Bill is a retired marine who served in the First Gulf War and is married to Lou. At 40, he is taller than the other men, wears his hair in a typical military style, and has an air of authority that is impossible to miss. He owns a trail guiding business, and his physique indicates his athleticism. He grew up in the town of Christmas and loves hiking, fishing, and hunting. If any of the men understand women and relationships, Bill’s the man. Bill doesn’t take orders from the boys, but his philosophy concerning women is generally to do as Lou says.

DAVE FOX – Dave is a typical, married father of two in his 30s who owns a butcher shop. He is painfully average in looks and intelligence. Dave cultivated his great sense of humor to compensate for his overly average averageness. He loves to crack jokes to avoid any real discussion of the issues. Way down deep inside, he loves his wife and children, but he feels that his mother-in-law is just too much to deal with at Christmas. Dave and Bill have been friends all their lives, and Jimmy is the butt of many of Dave’s jokes because Dave secretly envies Jimmy’s free and easy bachelor life.

BARBIE JO FOX – Barbie Jo is the beleaguered wife of Dave and the daughter of Verna Belle. She has two children and Dave to raise. She is attractive but frazzled. She never quite manages to look completely put together. Barbie Jo’s mother never lets her forget that she could have married better, gotten a better education, and just generally done better in life if she hadn’t married Dave the butcher right out of high school. Barbie Jo works full-time at the diner, and Lou considers Barbie Jo her “right hand girl.”

JIMMY WEAVER – Jimmy considers himself the ‘lady’s man’ in town. In his mid 20s, he is cute and charming, but he isn’t terribly smart. He is woefully lacking in any understanding of what women really want from a man. Jimmy’s family has owned a hog farm near town for generations, and Jimmy is a real, down-home, farm boy. He loves to hunt and fish and basically do whatever he darn well pleases. He is engaged to the town hottie, Darlene. He met Bill and Lou when he started dating Darlene, and Bill and Dave added him to their group right away because he shares their love of women, beer, and most of all, hunting!

DARLENE FULMER – Darlene is an All-American beauty! In her 20s, she is blonde and built! Darlene wears short skirts and tight sweaters. She is a typical rodeo queen with horses on her mind and cowboys on her tail. No hairstyle is too big, no jewelry too outrageous for Darlene. She is a complete innocent who accepts everything at face value. No one considers Darlene a brain, but what she lacks in smarts, she makes up for in heart. She met Jimmy through an internet dating service two years ago. Darlene hopes to marry Jimmy and is a good hearted gal who just wants to make the world a better place!

MARY SUE ARCHER – Mary Sue is a pregnant teen who shows up in the middle of chaos and brings the true gift of Christmas. She is from anywhere and may have no accent at all. She is tired and unkempt and desperately in need of friends.

MARK RILEY – Mark is in college and the son of the town’s only doctor. He has a huge crush on Darlene, but he’s never told her. He’s small and nerdy and shy, but never judge a book by its cover!