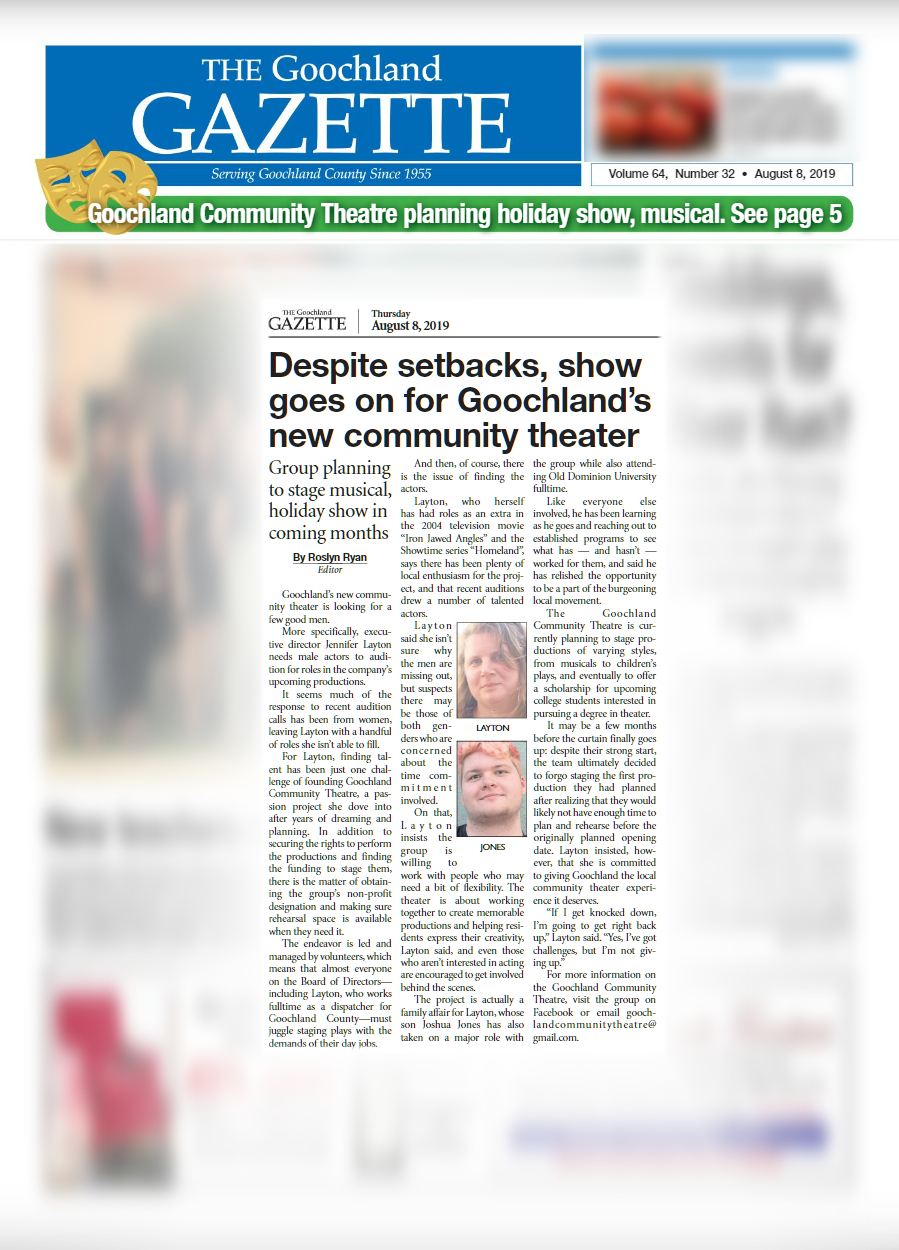 We Were In The Goochland Gazette! 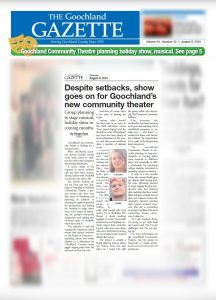 Goochland’s new community theater is looking for a few good men. More specifically, executive director Jennifer Layton needs male actors to audition for roles in the company’s upcoming productions. It seems much of the response to recent audition calls has been from women, leaving Layton with a handful of roles she isn’t able to fill. For Layton, finding talent has been just one challenge of founding Goochland Community Theatre, a passion project the dove into after years of dreaming and planning. In addition to securing the rights to perform the productions and finding the funding to stage them, there is the matter of obtaining the group’s non-profit designation and making sure rehearsal space is available when they need it. The endeavor is led and managed by volunteers, which means that almost everyone on the Board of Directors — including Layton, who works full time as a dispatcher for Goochland County — must juggle staging plays with the demands of their day jobs.

And then, of course, there is the issue of finding the actors. Layton, who herself has had roles as an extra in the 2004 television movie “Iron Jawed Angles” and the Showtime series “Homeland”, says there has been plenty of local enthusiasm for the project, and that recent auditions drew a number of talented actors. Layton said she isn’t sure why the men are missing out, but suspects there may be those of both genders who are concerned about the time commitment involved. On that, Layton insists the group is willing to work with people who may need a bit of flexibility.

“The theater is about working together to create memorable productions and helping residents express their creativity,” Layton said, “and even that who aren’t interested in acting are encouraged to get involved behind the scenes.” The project is actually a family affair for Layton, whose son Joshua Jones has also taken on a major role with the group while also attending Old Dominion University. Like everyone else involved, he has been learning as he goes and reaching out to established programs to see what has — and hasn’t — worked for them, and said he has relished the opportunity to be a part of the burgeoning local movement.

The Goochland Community Theatre is currently planning to stage productions of varying styles, from musicals to children’s plays, and eventually to offer a scholarship for upcoming college students interested in pursuing a degree in theater. It may be a few months before the curtain finally goes up: despite their strong start, the team ultimately decided to forgo staging the first production they had planned after realizing that they would likely not have enough time to plan and rehearse before the originally planned opening date. Layton insisted, however, that she is committed to giving Goochland the local community theater experience it deserves. “If I get knocked down, I’m going to get right back up,” Layton said. “Yes, I’ve got challenges, but I’m not giving up.” For more information on the Goochland Community Theatre, visit the group on Facebook or email goochlandcommunitytheatre@gmail.com.